As you pass through one of Ohio’s historic covered bridges, the past and present collide. Ashtabula County, in Ohio’s northeast corner, is considered the covered bridge capital of the state and is home to 19 of these unique structures.

Some look upon these engineering feats and appreciate the craftsmanship and ingenuity of the builders. Others are in awe of the simple beauty of the historic structure as part of the landscape: magical and colorful crossings set against the area’s rolling hills and vineyards. Covered bridges offer a one-of-a-kind look at a bygone era. 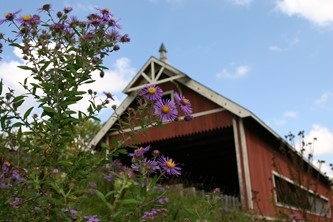 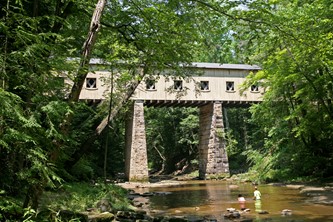 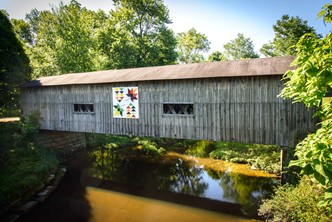 Many ask WHY the bridges are covered. It has been speculated that the purpose was to provide shelter during inclement weather or to prevent horses from being afraid of crossing the water. The real reason is to protect the structure supporting the bridge. Without protection from the elements, the wooden timbers supporting the bridge would decay and eventually collapse. By keeping them dry, the bridges last much longer. 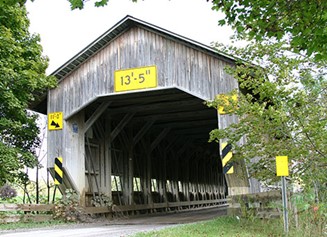 The earliest documented covered bridge structures remaining in the area date back to 1867 (Mechanicsville and Windsor Mills) and 1868 (Root, Middle, and Harpersfield), but not all are over a century old. Ashtabula County boasts the construction of a bridge as recently as 2016: Riverview pedestrian bridge, which is located under Smolen-Gulf. The longest covered bridge in the United States is the Smolen-Gulf bridge at a length of 613 feet. Built in 2008, it has a life expectancy of 100 years. Also found in northeast Ohio is America’s shortest drive-through bridge: Liberty Street. Of Ashtabula’s 19 bridges, 17 are still operational, allowing vehicle traffic through year-round.

Northeast Ohio has embraced the historic icons. Visitors to Covered Bridge Pizza can eat in an actual covered bridge that was dismantled and moved in the 1970’s. Near Harpersfield Bridge is a Covered Bridge Shoppe offering souvenirs and gifts. 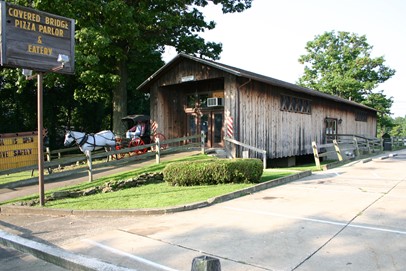 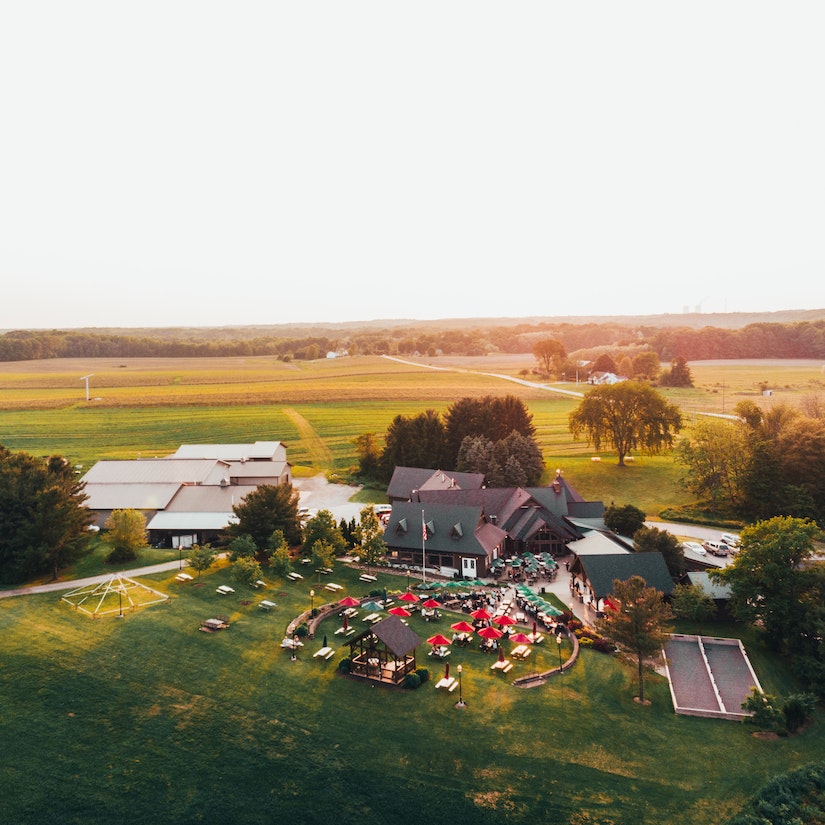 10 Things to Do on a Monday 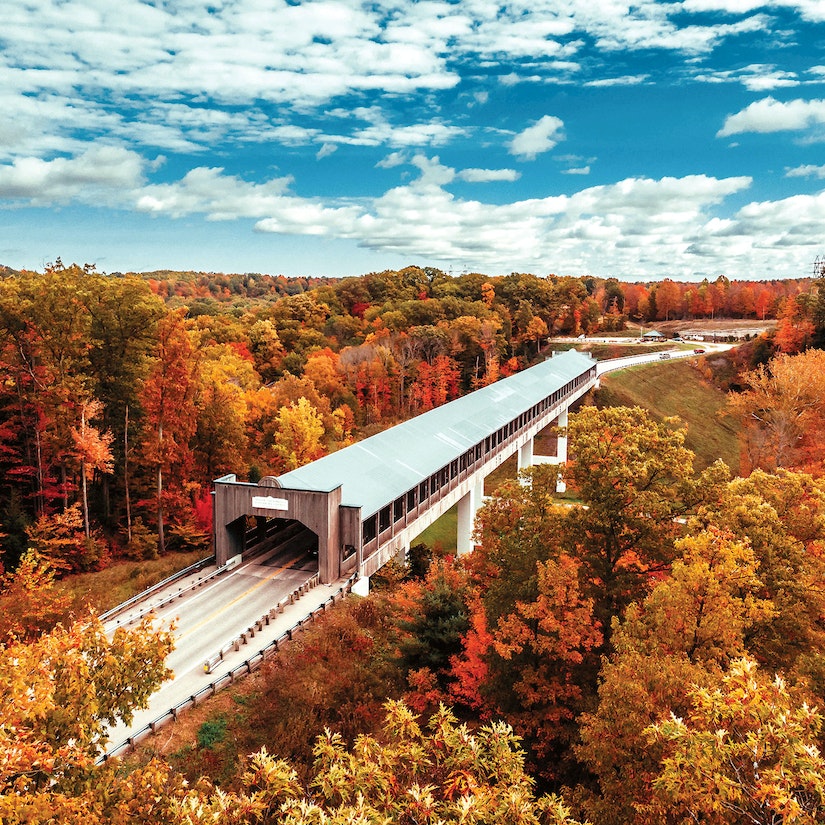 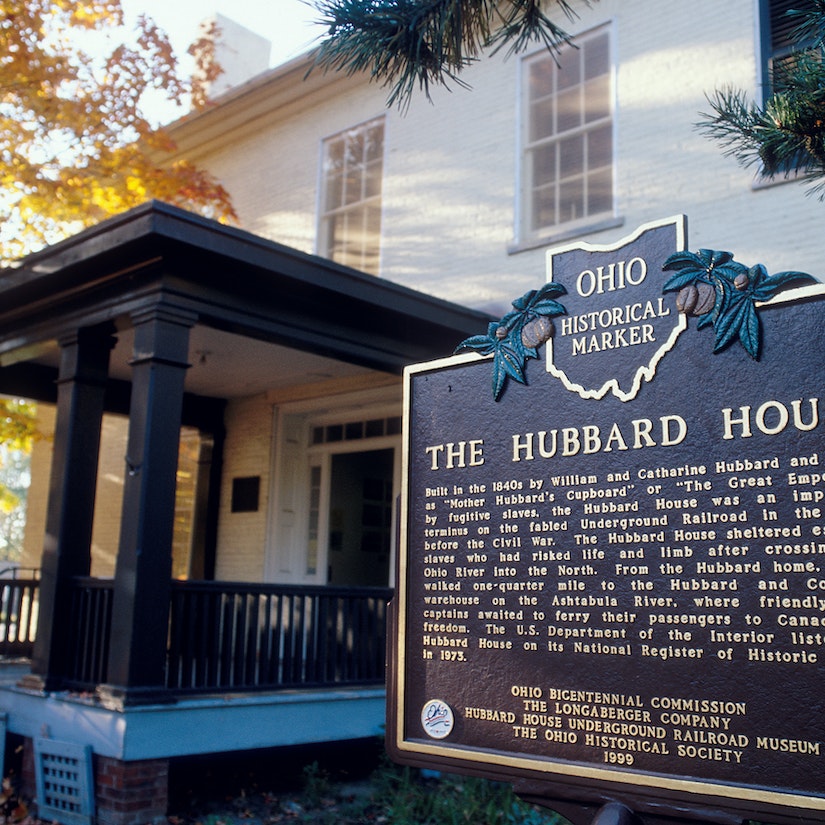 View all Stories about Covered Bridges

The construction date of this 125 ft. Town lattice bridge is unknown. It sits 25 feet above the Conneaut Creek and was extensively renovated in 1994. 3.4 miles from State Road Covered Bridge 371 Creek Rd., Conneaut OH 44030

A 94 ft. long Town lattice bridge built in 1868. Doyle spans Mill Creek. Mill Creek is a tributary of the Grand River. This bridge was renovated in 1987 when a laminated arch was added. 1.8 miles from Jefferson 1300 Doyle Rd., Jefferson OH 44047

The Graham Road Bridge, which was built from remnants of a bridge washed downstream in the 1913 flood, now sits in a small park on the south side of the road. The 97 ft. Town truss was over the west branch of the Ashtabula 4646 Graham Rd., Jefferson OH 44047

This two span Howe truss bridge is 228 ft. long, formerly the longest covered bridge in Ohio. It is now the second longest in the State. It spans the Grand River which is the primary drainage channel of western Ashtabula 1122 Harpersfield Rd., Geneva OH 44041

The longest single span Covered Bridge in Ashtabula County, this 156 ft. Howe truss with arch was built over the Grand River in 1867. The arch is 15 layers of 2x8 lumber and is encased by large beams which from the X's of the 1153 Mechanicsville Rd., Geneva OH 44041

This 136 ft. Howe Truss bridge was built in 1868 over Conneaut Creek, which is the longest river in eastern Ashtabula County. It was reconstructed in 1984 with the help of three volunteers and four college students. 8.3 miles 910 Middle Rd., Conneaut OH 44030

Located on Dewey Road in Plymouth Twp., Olin is the only bridge named for a family. Olin's have owned property next to the bridge since it was built in 1873. The 115 ft. Town lattice structure over the Ashtabula River was 1880 Dewey Rd., Ashtabula OH 44004

This 114 ft. Town lattice bridge sits high above the Grand River. It was built in 1874. The floor was rebuilt in 1981 and glue laminated wood girders were added. Center steel bracing had been replaced under the bridge in 1945 3349 Riverdale Rd., Rock Creek OH 44084

This bridge is 150' long and 14' wide, making it one of the county's larger bridges, yet it carries only pedestrian traffic. It mirrors the Pratt arch design of it's big brother, Smolen-Gulf, which rises above the pedestrian 4878 Plymouth Ridge Road, Ashtabula  44004

Containing 97,000 ft. of southern pine and oak, the State Road Bridge was erected in 1983 across the Conneaut Creek. The 152 ft. Town lattice span was the first covered bridge designed and built by County Engineer John Smolen 5899 State Rd., Kingsville OH 44048

Clearance 15'0' (10.6 mi. from Doyle Rd. Bridge) The shortest covered bridge in the United States spans only 18ft. Its design is one of a kind. The structure is supported by a single Kingpost and its roof is a Scissor Truss 94 W. Liberty St., Geneva OH 44041

Located in a very picturesque area of the county, Windsor Mills Bridge spans Phelps Creek, a tributary of the Grand River. Built in 1867 the Town Lattice sits atop cut stone abutments with unique center supports. One is of 7696 Warner Hollow Rd., Windsor OH 44099

Map It
View all Covered Bridges